The Smith and the Devil, Russian Folk Tale 1916 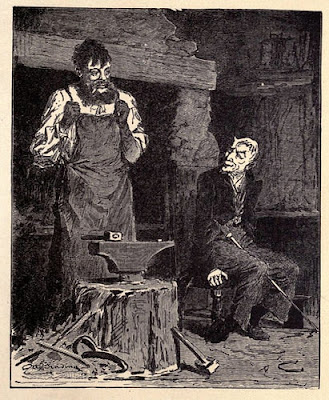 THE SMITH AND THE DEVIL, Russian Folk Tale 1916

Once upon a time there was a smith who had a son six years old—a sturdy and sensible lad. One day the oldman was going into the church, and stood in front of a picture of the Last Judgment. And he saw there was a devil painted there so terrible, so black, with horns and tail! "What a fine devil!" he thought. "I will go and paint such a devil for myself in the smithy." So he sent for a painter and told him to paint on the doors of the smithy a devil who should be exactly the same as the one he had seen in the church. This was done.

From this time forward, the old man, whenever he went into the smithy, always looked at the devil and said, "Hail, fellow-countryman!" And soon after he would go up to the forge, light the fire, and set to work. So he went on living for some ten years on most excellent terms with the devil. Then he fell ill and died. His son succeeded him and took over the smithy. But he had no such respect for the devil as his father had had. Whether he went early to the smithy or not, nothing prospered; and, instead of greeting the devil kindly, he went and took his very biggest hammer and knocked the devil three times on his forehead, and then set to work. When a holy feast-day came by, he went into the church and lit a taper in front of the saints; but, as he approached the
devil he spat on him. For three whole years this went on; and every day he greeted the unclean spirit with a hammer and spat on him.

The devil was very patient, and endured all this maltreatment. At last it became beyond bearing, and he would stand it no longer. "Time is up!" he thought. "I must put an end to such contemptuous treatment." So the devil turned himself into a fine lad and came into the smithy.

"Will you take me into the smithy as an apprentice? I will heat your coals and will blow the bellows."

Well, the smith was very glad. "I certainly will!" he said. "Two heads are better than one."

So the devil turned apprentice, and he lived a month with him, and soon got to know all of the smith's work better than the master himself; and, whatever the master could not do, he instantly carried out. Oh, it was a fine sight, and the smith so grew to love him, and was so content with him—I cannot tell you how much!

One day he did not come into the smithy, and left his underling to do the work; and it was all done.

Once when the master was not at home, and only the workman was left in the smithy, he saw an old rich lady passing by. He bobbed out his head, and cried: "Hail there? There is new work to be done—old folks to be turned into young!"

Out skipped the old lady from her barouche and into the smithy. "What are you saying you can do? Is that really true? Do you mean it? Are you mad?" she asked the boy.

"No reason to start lecturing me," the Evil Spirit answered. "If I didn't know how I should not have summoned you."

"What would it cost?" the rich woman asked.

"It would cost five hundred roubles."

"Well, there is the money. Turn me into a young woman!"

The Evil Spirit took the money, and sent the coachman into the village to get two buckets of milk. And he seized the lady by the legs with the pinchers, threw her into the forge, and burned her all up. Nothing but her bones were left. When the two tubs of milk came, he emptied them into a pail, collected all the bones, and threw them into the milk. Lo and behold! in three minutes out the lady came, young—yes, alive and young, and so beautiful! 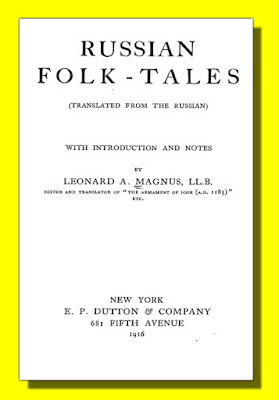 She went and sat down in the barouche and drove home, went up to her husband, and he fixed his eyes on her, and didn't know his wife. "What's the matter? Have you lost your eyesight?" the lady asked. "Don't you see it is I, young and stately; I don't want to have an old husband. Go at once to the smith and ask him to forge you young, and you won't know yourself!"

What could the husband do? Husbands must obey, and so off he drove.

In the meantime, the smith had returned home and went to the smithy. He went, and there was no sign of his man. He looked for him everywhere, asked everybody, questioned them, but it was no good, and all trace had vanished. So he set to work by himself and began hammering.

Then the husband drove up and said straight out to the smith: "Make a young man of me, please!"

"Are you in your senses, master? How can I make a young man of you?"

"I really have not any idea!"

"Liar! fool! swindler! Why, you turned my old woman into a young one. Do the same by me, otherwise life with her won't be worth living."

"But I have not seen your wife!"

"Never mind!—your young man saw her, and if he understood how to manage the work, surely you, as the craftsman, understand! Set to work quickly, unless you want to taste worse of me and be birched."

So the smith had no choice but to transform the master. So he quietly asked the coachman what his man had done with the lady, and thought: "Well, I don't mind! I will do the same; it may come out to the same tune, or it may not. I must look out for myself."

So he stripped the lord to his skin, clutched his legs up with nippers, threw him into the forge, began to blow up the bellows, and burned him to ashes. Afterwards he threw the bones—hurled them all into the milk, and began watching would a young master emerge from the bath. And he waited one hour, and another hour, and nothing happened, looked at the little tub—all the little bones were floating about all burned to pieces.

And what was the lady doing? She sent messengers to the smithy. "When was the master to be turned out?" And the poor smith answered that the master had wished her a long life. And you may imagine what they thought of this. Soon she learned that all the smith had done had been to burn her husband to bits and not to make him young, and she was very angry indeed, sent her body-servants, and ordered them to take the smith to the gallows. The order was given, and the thing was done. The attendants ran to the smith, laid hold of him, and took him to the gallows.

Then the same young man who had acted as a hand to the smith came and asked: "Where are they taking you, master?"

"They are going to hang me!" the smith said. And he explained what had happened.

"Swear that you will never strike me with your hammer, and I will secure you such honour as your father had. The lady's husband shall arise young and in full health."

The smith swore and made oath that he would never raise the hammer on the devil and would give him every honour.

Then the workman ran to the smithy, and soon returned with the husband, crying out to the servants to stop and not to hang the smith, for there the master was! He then untied the ropes and set the smith free.

And the youth thereafter never more spat on the devil and beat him with a hammer. But his workman vanished and was never seen again. The master and mistress lived on and experienced good in their life, and they are still alive, if they are not dead.

For a list of all of my disks, with links, go to https://sites.google.com/site/gdixierose/ or click here
Posted by Heinz Schmitz at 6:51 AM

This Kindle book is now available on Amazon by clicking here...and it is only 99  cents This book has over 30 chapters, it is over 300... 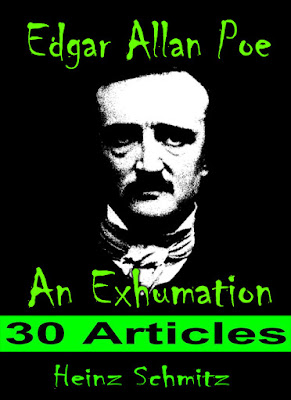