The Lost Literature of Socialism

The Lost Literature of Socialism

The literature of socialism is lost only in the sense of not having been read for a very long time. George Watson has been re-reading this literature as a professional literary critic, with strong interests in both political affairs and the history of ideas. Many of his findings are astonishing. Perhaps for readers today the most astonishing of all is that “In the European century that began in the 1840s, from Engels’ article of 1849 down to the death of Hitler, everyone who advocated genocide called himself a socialist and no conservative, liberal, anarchist or independent did anything of the kind.” (The term “genocide” in Watson’s usage is not confined to the extermination only of races or of ethnic groups, but embraces also the liquidation of such other complete human categories as “enemies of the people” and “the Kulaks as a class.”)

Although Watson himself unfortunately never defines the key word “socialism,” he is apparently following throughout the usage of the old British Labour Party. From its foundation, it proclaimed itself a socialist party and stated its aim in Clause IV of its constitution—thereafter printed on every membership card—as being “the public ownership of all the means of production, distribution and exchange.”

During the Age of Conception, many were attracted to socialism precisely because they already saw it as what Watson calls a “Tory project,” a project necessarily involving rule by an irresponsible elite. Some of these elitists, such as the science fiction writer H.G. Wells and the dramatist Bernard Shaw, lived long enough into the Age of Fulfilment to welcome this aspect of the realization in the USSR of the socialist vision. Before World War I, other socialists, such as the novelist Jack London and the psychologist Havelock Ellis, saw socialism as leading both fortunately and necessarily to the triumph of the white races over the black and the brown.

For those of us born before World War II, the most interesting section of the book is that dealing with the intellectual relations between the teachings of Adolf Hitler and those of Marx and his professed followers among Hitler’s contemporaries. In his autobiography, and in recorded conversations with intimates among his own followers, Hitler said such things as, “I have learned a great deal from Marxism, as I do not hesitate to admit,” that “the whole of National Socialism is based on Marx,” and that without racist commitments his own political movement “would really do nothing more than compete with Marxism on its own ground.”

Even those who are aware that Hitler’s party was the National Socialist German Workers’ Party have doubted the sincerity of its socialist professions. This is in part because Hitler, upon coming to power, refrained for tactical reasons from launching an immediate and extensive program of state takeovers of private industries, and in part because these skeptics have not enjoyed the benefits of Watson’s re-readings of the lost literature of socialism.

His chapter on “Marx and the Holocaust” begins by telling us that Rudolf Hoess, commandant of the infamous Auschwitz death camp, recalled in his memoirs that even at the height of the Nazi-Soviet war of 1941-45, his colleagues had respected the socialist example of an exterminatory program based on forced labor. Watson then proceeds to deploy further evidence of Soviet influence on the Nazis and to cite other relevant passages from the works of Marx, Engels, Lenin, and other socialist luminaries, all presenting candidates for or possible methods of genocide. The connection between socialism and genocide could hardly be made any clearer.

From all this, Watson concludes that “it is becoming ever more probable that it was not just the idea of genocide that the Nazis owed to Marx and the Marxists, but its detailed practice too, not excluding camps and gas chambers. The shadow of the socialist idea grows longer and longer.”
Antony Flew is Emeritus Professor of Philosophy, University of Reading, England. Antony Flew was an English philosopher. Belonging to the analytic and evidentialist schools of thought, Flew was most notable for his work related to the philosophy of religion. During the course of his career he taught at the universities of Oxford, Aberdeen, Keele and Reading, and at York University in Toronto.

This article was originally published on FEE.org. Read the original article.

The Strange History of Easter and the Christian Cross: An Anthology Kindle Edition by Heinz Schmitz This Kindle book is now available... 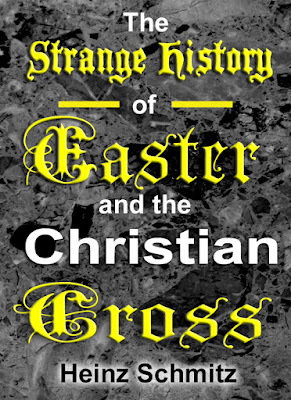